Just published in the October issue of NVVK Info: 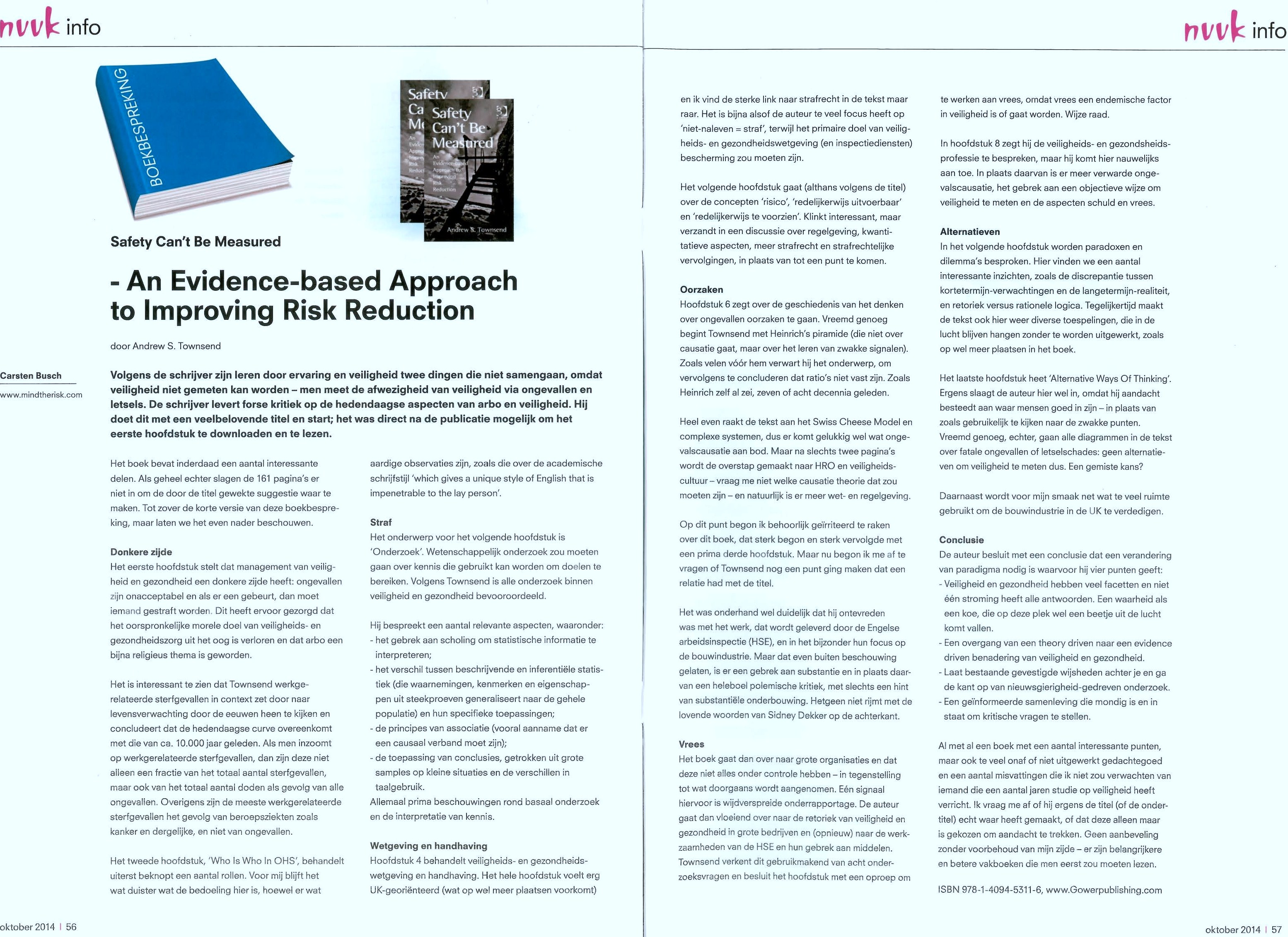 According to Townsend learning by experience and safety are mutually exclusive because safety cannot be measured - it’s the absence of safety that is measured through accidents and injuries. The book has a lot of criticism on the current state of occupational health and safety and it’s a book with a promising title and start (I had the opportunity to download and read the first chapter right after its publication) thus and some interesting parts indeed, but the book’s 161 pages fail to fulfill the suggested critical take on safety. That would be the short version of this review, but let’s look more closely.

The first chapter states that there is a dark side to the management of health and safety: accidents are unacceptable and if one happens someone must be punished. This has led the original moral purpose of health and safety astray and safety has almost become a religious theme. Interestingly Townsend puts occupational fatalities in context by looking at mortality distribution and concludes that today’s curve matches that of about 10.000 years ago. Zooming in on occupational death these are not only a fraction of total death, but also of all accident death, and besides most workplace related death are due to occupational illness (cancers etc.).

The second chapter, ‘Who Is Who In OHS’ is just skimming various actors. To me it’s not quite clear where this goes but some nice observations like about the academic writing that “gives a unique style of English that is impenetrable to the lay person”.

Research is the subject of the next chapter and this should be about knowledge that can be used to achieve outcomes. According to Townsend all safety and health research is biased. He discusses a number of relevant aspects, including:

Chapter 4 is about health and safety law and its enforcement. The entire chapter feels very UK-oriented and an odd thing for me is the major connection to criminal law in the text. It’s like the author has too much focus on ‘non-compliance = punishment’, while the primary goal of health and safety legislation (and regulators) should be protection. The next chapter deals - according to its title - with the concepts of risk, reasonably practicable and reasonably foreseeable. Sounds interesting, but loses itself in a discussion of legislation, quantitative aspects, more criminal law and prosecutions.

Chapter 6 claims to be about the history of accident causation. Oddly the author starts with Heinrich’s pyramid (which isn’t about causation, but about learning from weak signals) confounding the subject like many before him in a serious way and then “shockingly” concludes that ratios are not fixed (as Heinrich himself said 7 or 8 decades ago in the first place). Then there is the briefest mention of the Swiss Cheese Model and complex systems (so at least some accident causation comes along), but after only two pages we’re over to HRO and safety culture (what accident causation theory that would be beats me) and, of course, more statue and regulation.

By this point I started to get majorly annoyed by this book that started well in the first chapter and had a strong third one, but here I start wondering if Townsend ever is going to make a point that deals with the title. It’s clear that he is not satisfied with the job done by the Health & Safety Executive (HSE), and especially their focus on the construction industry, but apart from that there is a lack of substance, but instead a lot of polemic criticism with only hints of actual substance behind it (which I find hard to match with Sidney Dekker’s praise on the back of the book).

The book then moves on to large organizations and how they not have things all that much under control - contrary to common belief. Firstly because of widespread underreporting. The author then fluently transits to the rhetoric of health and safety in large companies and (again) how the HSE works and their lack of resources. Townsend explores this by way of eight research questions. He concludes this chapter with an appeal that more work is needed on fear because fear is or will be endemic in safety. Sage advice.

Chapter 8 pretends to discuss the health and safety profession but doesn’t really get to a point, or even to a proper discussion. Instead we get more confounded accident causation, the absence of objective measurements of safety and the element of blame and fear.

The next chapter discusses paradoxes and dilemmas and does have some interesting insights, like the discrepancy between short term expectations versus the long term reality and rhetoric versus rational logic. At the same time there are suggestions in the text that just remain hanging in the air, as happens at other places in the book.

The final chapter is title ‘Alternative Ways Of Thinking’. In one way the author succeeds by paying attention to things that people are good at (instead of at what they’re bad at). Strangely however all diagrams in the text show fatalities and injuries to illustrate something - no alternatives for measuring safety here. A missed chance? A bit too much space used to defend the UK construction industry too for my taste.

The author concludes with the need for a paradigm shift for which he gives four key points:

All in all, some interesting points in this book, but too much unfinished thought, some confounded views (which I don’t expect from someone who has spent this much time studying safety) and I wonder if he really has explained the title (or the subtitle, for that matter) or that this just was chosen to draw attention. No clear recommendation from me hence, there are more important books to read first.