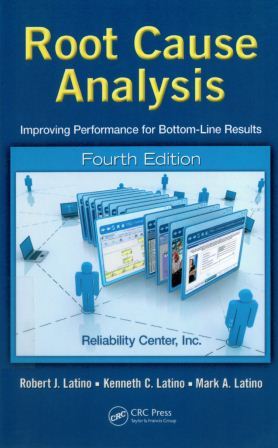 I saw this book by chance in the display of my employer’s library and couldn’t resist borrowing it and so I spent some time browsing and reading parts of the text. Let me be frank: after this brief exposure to the book I’m not convinced, but maybe there are others who think they will have greater benefit from the book than me.

My main point of criticism would be that the book concentrates mainly on the writer’s own methodology (PROACT, of course a registered trademark) and not so much on root cause analysis in general. Chapter 13 even discusses the software program and is pretty useless for most casual readers of the book. The book does not have an overview of literature references (some literature is referenced in footnotes) and how much of it actually is rooted in research is doubtful. I have the feeling that this rather is a description of their method based on their experiences than that it should be regarded as a professional text book.

Nothing wrong with an experienced based book, by the way (far from it!), but it’s almost as if reference to ‘academic’ literature is only used as dressing. Take for example Chapter 5, titled “Opportunity Analysis: Mindfulness”. This chapter starts with a quote from Weick and Sutcliffe and then has no relation whatsoever to the concept of mindfulness as discussed in “Managing The Unexpected”.

According to the back cover Chapter 7 on Human Error is a new one compared to previous editions. This chapter starts with a Top 10 of human errors without revealing where this Top 10 comes from and how reliable it is. In fact, when reviewed critically one may debate whether these all are human errors. If you ask me I would categorize at least half part as organizational errors. Strangely there is no reference to the work on human error by for example James Reason, but in the next chapter we do find his Swiss Cheese Model so the authors should be familiar with his work.

Despite the criticism there are some good points to be found in Chapter 7. I found especially the discussion of rules and procedures on pages 103 to 106 very good. And it must be noted that the brothers Latino make a very strong case against blame and scapegoating and that they are genuinely concerned about finding out WHY human errors occur.

The final chapter presents some case studies that regrettably are presented in an extremely cluttered manner and provide little value. If anything they confirm my gut feeling that the ‘logic tree’ methodology from the book does lack some robustness and logic (despite being around for many years). Please note that this is ‘only’ a gut-feeling so far: I haven’t studied the trees or the methodology intensively. It’s mainly that something in the linear structure of physical, human and latent root causes does not feel right (which is strengthened by the presented case studies), but this may boil down to a manner of notation and a not full intuitive way of reading results. Any which way, even such shortcomings don’t necessarily mean that it can’t be a useful tool, but I think that there are better (and free/non-trademarked) tools around.

One chapter that I found rather interesting is Chapter 9 that deals with the analysis team and its tasks, roles and the like.

Summarizing: if you manage to deal with some of the points of criticism mentioned above there are some worthwhile elements to be found in this book, but it’s definitely no must have or must read. As far as I’m concerned: there are better and more practical books about root cause analysis on the market. There are also book with fewer abbreviation and acronyms…