Day 3 was entirely dedicated to Just Culture. Where does the perceived need for just culture come from? And what is Just culture anyway? It appears that the term Just Culture has gone off the rail in various places. The term has even become a verb - “I have been just cultured”. For many organisations it has become a term about abuse rather than justice.

“Just Culture? We know it when we see it, we’ll know if it is really just when you start applying it”.

In many organisations a Just Culture policy is very much a reminder of who is in power. A typical example of a definition of Just Culture is from Eurocontrol:

"Just Culture" is a culture in which front-line operators and others are not punished for actions, omissions or decisions taken by them which are commensurate with their experience and training, but where gross negligence, wilful violations and destructive acts are not tolerated.”

The key word in all these Just Culture definitions is the BUT. Everything that comes before the but is to mollify, what comes after will steer the direction of actions. An additional problem with relation to Just Culture is that there will be external forces (police, internal affairs, regulators, politicians, media, …) calling for accountability, liability etc.

Just Culture attempts to draw a clear line between acceptable and non-acceptable actions. The Systems Approach does not look at WHO is responsible, but WHAT is responsible. What is it that sets people up for failure? Failure and success are joint products of many factors.

But, may some people say, isn’t the consequence of this view that people will “blame the system”? Worryingly these concerns come from inside the profession. Reason (1999): “has the pendulum swung too far? We need to revisit the individual”. Wachter (2009): “more aggressive approach of poorly performing practitioners”. Shojania and Dixon-Woods (2009): “performance and behaviour of individuals”. These are outcries without evidence of a better solution.

[At this point the Learning Lab was side-tracked into a rather lengthy discussion of intrinsic (autonomy, mastery and purpose) and extrinsic (sticks and carrots) motivation which I chose not to take notes - please check for example Barry Schwartz’s work some good explanations. One interesting observation, however was that some managers/organisations seem to require from people “you have to have intrinsic motivation”. Ha ha ha]

Safety Culture allows the boss to hear bad news. This requires a willingness to disclose, which requires trust. Just Culture is an approach to deal with this “pull and push”. The ‘but’ provides a compromise between the Systems Approach and the possibility to punish the individual.

Retributive Justice is about punishment. It asks:

These four questions still fuel most ‘just culture’ systems. These therefore become retributive in nature. This is backward looking (back at the case) accountability.

An often heard comment is: “You have nothing to fear if you have done nothing wrong…”. How scary is that? Should you fear the worst? Or should one see this as a promise for ‘fair trial’ (which you often just can forget in non-democratic organisations). There has been argued that practitioners should judge cases instead of prosecutors and judges. Would that be a way to go? Or should one educate the judges and prosecutors (“if you can’t beat them, join them”).

Are there shades of retribution? How to go from honest unintended mistakes through at-risk behaviour and choices that increase risk to negligence and conscious disregard? The problem with judgements is that they are judgements (and not objective facts)! When you look at a definition of negligence, you will find that there are many (!!!) judgements in that definition. For example: what are ‘normal standards’, ‘prudent’, ‘reasonably skillful’, etc. Who gets to say? The government? The judge? A jury? In organisations it’s often done by default, not by conscious decision!

Just Culture processes are to assess someone else’s fallibility by people who are fallible… Higher up in organisations the system is often perceived as just (Von Thaden, 2009), but blame drives reporting underground (Frederick & Lessin, 2000). To make this system work there are two safeguards needed:

The problem: NONE of this exists in the non-democratic organisations we work in. Most countries have a defence against the arbitrariness of justice and (especially) the Crown since the Magna Carta. Ideally, one should have a judge with no stake in the case, but strictly seen is this impossible and in organisations it isn’t even considered. Another problem is that one needs knowledge of the messy problems in order to be fair. But this can lead to conflicts with independence - people who know the messy details are probably or have been part of the environment…

A way to enhance Substantial Justice is to have worker/practitioner input in the rules that are made. This creates also greater ownership and helps to be closer to work-as-done.

Procedural Justice and Just Culture is problematic in organisations because they are not democratic. They are hierarchical (top-down), there is no separation of powers and power goes over justice, law or rule.

There are some possible solutions, but all have problems:

There are several just culture ‘decision models’ around - many are a variation of the one pictured below and can be found in many (SMS) documents. 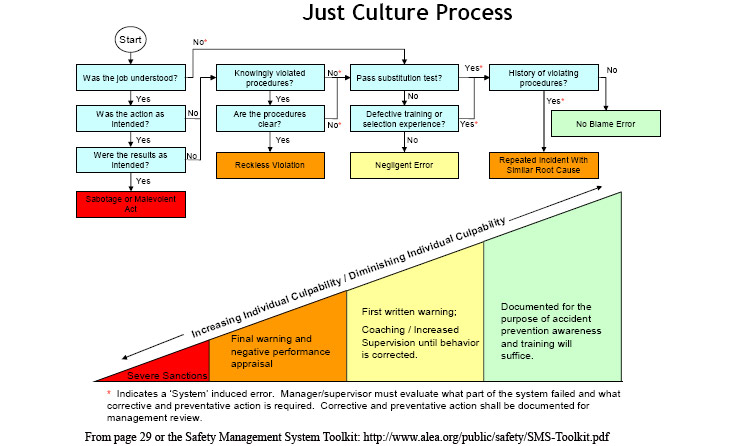 How badly this superficially good looking model works was discussed by example of the case of freely distributed mosquito nets in Africa and while this act is extremely well-intended, there are many complex side-effects (the tiny mazes catch small fish and wipe out populations, insecticides get in the water, etc.). Can one hold a mother who goes fishing with the net responsible for these effects?

A common principle of justice is that you are innocent until proven guilty. The process pictured above shows the opposite. Starting with guilty on the left, you are guilty until proven innocent! To make things worse: these things are usually totally arbitrary because you can argue for about any junction in the flow-chart.

Restorative Justice is an alternative approach that goes way back. For example, the ancient Hebrew laws about land and property disputes would typically be solved with restorative justice. Also the TRC in South Africa builds on these principles.

Braithwaite (1999): “A process where all have an opportunity to discuss how they have been affected by an injustice and to decide what they need to repair the harm”.

What cultural conditions do you need for things like these can happen? And does it only work for things that could have gone wrong, but just went right (someone made a serious mistake, but no one was hurt), or also when outcomes are serious?

The day was closed by an exercise of a serious accident and the discussion if some people are really beyond restorative justice because the injustice seems so grave to us. Or is it the process that is unleashed onto people such that it doesn’t leave space for restorative thoughts anymore?

Much depends on where you stand ethically, what moral school you adopt. Every approach makes certain analytical or other sacrifices through the inherent limitations of the underlying models. You can deal with this by basing your position of evidence (not just outrage) and paying attention to other positions.

Go back to Day 2 or proceed to Day 4 (available when someone sends me their notes...)