In NVVK Info of February 2015 the review of Gerd Gigerenzer's "Risk Savvy" can be found: 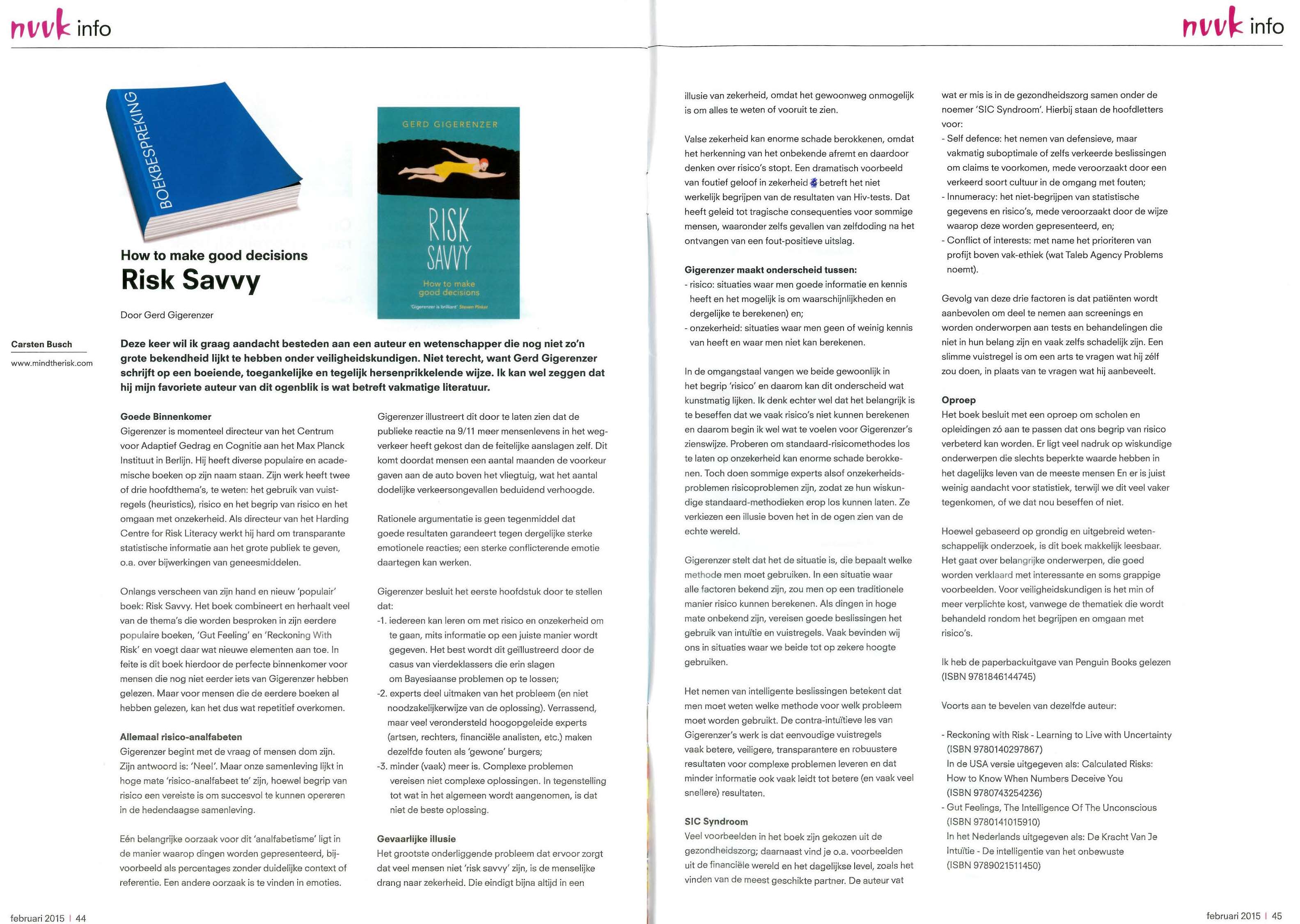 This time I would like to pay some attention to an author and scientist who seems to be relatively unknown among safety professionals. This must be rectified, because Gerd Gigerenzer writes in an accessible and brain engaging way and I must say that he is my favourite author at the moment with regard to professional literature.

Gerd Gigerenzer is Director of the Center for Adaptive Behavior and Cognition at the Max Planck Institute for Human Development in Berlin. He has published several popular and academic books. His work circles around two or three main themes: the use of rules of thumb (heuristics), risk and the understanding of risk and handling uncertainty. As director of the Harding Centre for Risk Literacy he works hard to bring more transparent statistical information to the larger public.

Recently a new ‘popular’ book of his was published titled “Risk Savvy”. The new book combines and repeats several of the themes covered in his previously published popular books, “Gut Feelings” and “Reckoning With Risk” and adds some new elements to those. This may just make this book the perfect starter for people who haven’t read something by Gigerenzer. For those who have, however, some things may appear to be repetitive because they’ve heard it before.

Gigerenzer starts by asking the question if people are stupid. His answer is no. But our society is largely risk illiterate, even though this literacy is a requirement to successfully operate in today’s society. One important cause for this illiteracy is the way things are presented e.g. as percentages without proper context or reference. Another cause is emotion, which Gigerenzer illustrates by demonstrating that the public reaction after 9/11 killed more people in road traffic than the terrorists did in the attacks because for a period of several months people preferred to travel by car instead by plane, thus increasing the number of fatal road accidents. Reason is not a guaranteed antidote against such emotional reactions; a stronger conflicting emotion, however, may be.

At the end of the first chapter Gigerenzer poses that:

The biggest underlying problem for many people not being ‘risk savvy’ is the human quest for certainty that nearly always ends up in an illusion of certainty because it’s just impossible to know and predict everything. False certainty can do enormous damage because it stops our recognition of the unknown and thus shuts down thinking about risks. A dramatic example for false belief in certainty is how misunderstanding of result from HIV tests has led to tragic consequences for some people (e.g. cases of suicide after a false positive).

Gigerenzer differentiates between risk (that which you have good information and knowledge about and where you can calculate probabilities and the like) and uncertainty (that where you have no or little knowledge about and where you cannot calculate). In everyday language we may capture both sides by the word ‘risk’ and therefore the difference may feel artificial, but I think it’s elementary to be aware that we cannot calculate all risks and therefore I’m warming to Gigerenzer’s view. Trying to apply standard risk tools to uncertainty again can do tremendous damage, yet some experts act like problems of uncertainty are problems of risk so that they can use their standard mathematical tools rather than facing the real world.

Gigerenzer argues that the situation determines what tool to use. In a situation where all factors are known we should try to calculate the risk. When things are highly unknown good decisions will require intuitions and heuristics. Often we are in situations where we use a bit of both sides. Intelligent decision making means knowing what tool to use for what problem. The counter-intuitive lesson of Gigerenzer’s work is that simple rules of thumbs/heuristics often give better, safer, more transparent and more robust results for complex problems and that less information also often leads to better (and much faster) results.

Many examples in the book are taken from the medical world (other examples come from a.o. finance and social life, including how to pick the best suitable partner). The author describes problems in health care by what he calls the SIC Syndrome where the capitals stand for:

A consequence of this is that patients are recommended to have screenings, tests and treatments that are NOT in their best interest and often even harmful. A smart heuristic is to ask a doctor what he would do himself, not ask what he would recommend.

The book ends with an appeal to reform schools and education so that our understanding of risks will increase. There is much emphasis on forms of mathematics that have limited applicability in most people's lives while there is little attention for statistics even though we encounter them much more frequently whether we realize it or not.

Even though it is based on some rigorous and extensive scientific research this is a very easy to read book about very important subjects, well explained with interesting examples. For safety professionals this book is more or less obligatory reading because of the subjects that are discussed with regard to understanding and handling risk.