In the picture below you'll find a scan of the review I wrote of Taleb's latest book, Antifragile, for the magazine of the Dutch Society of Safety Science, NVVK Info and was published there in the February 2014 issue. 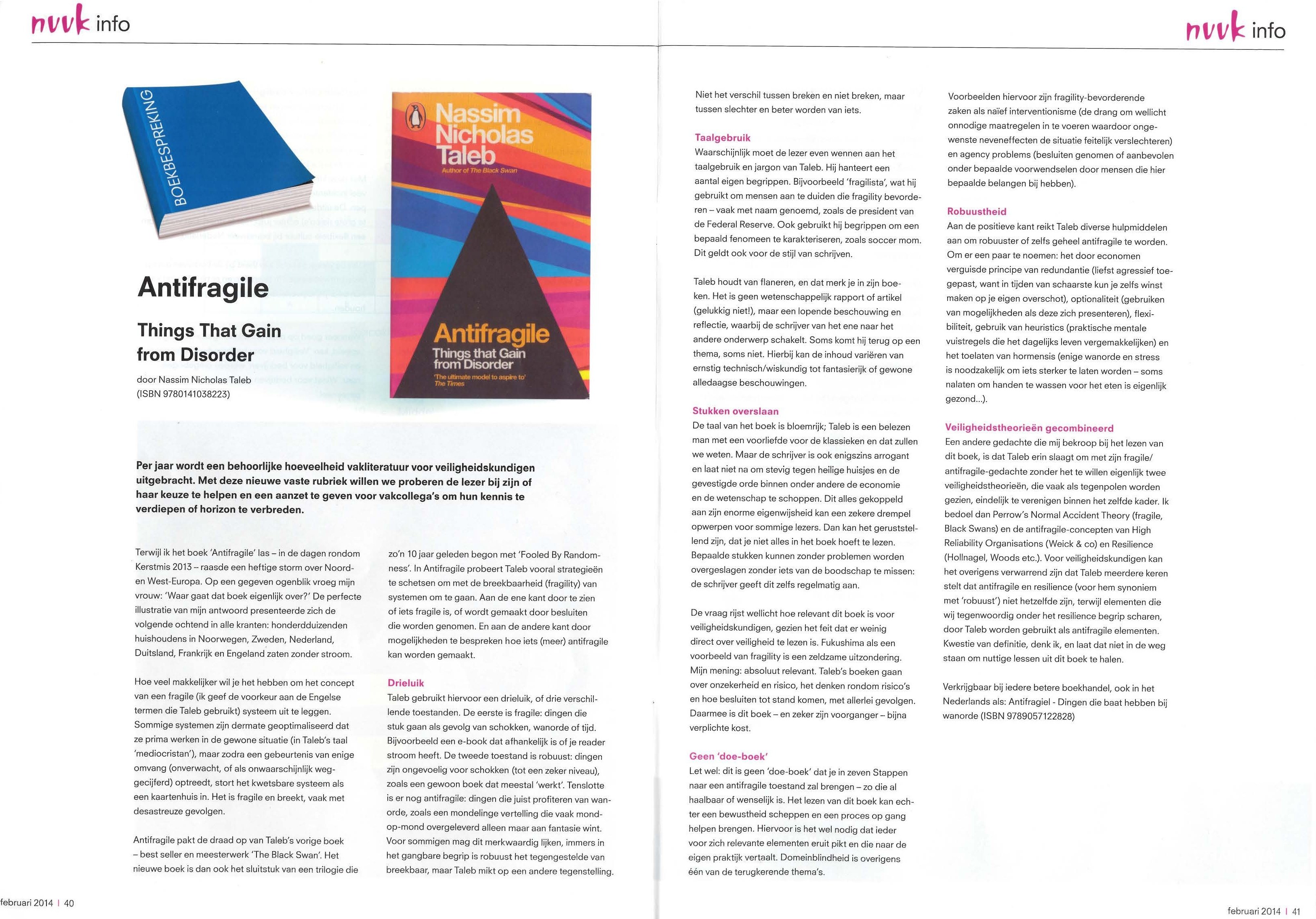 Antifragile - Things That Gain from Disorder, by Nassim Nicholas Taleb

While I was reading this book - during the days around Christmas 2013 - a major storm ravaged northern and western Europe. At one point my wife asked “What is that book about, anyway” and the perfect illustration of my answer presented itself in all newspapers the next morning: hundreds of thousands of households in Norway, Sweden, The Netherlands, Germany, France and The United Kingdom were without electricity. How much easier could you want for an example to explain the concept of a fragile system? Some systems are so much optimalised that they work smoothly in the normal situation (in Taleb’s vocabulary ‘mediocristan’), but as soon as an event of certain impact (unexpectedly, or dismissed as not probable) manifests itself, the vulnerable system collapses as a house of cards. The system is fragile and breaks, often with catastrophic consequences.

Those who have read Taleb’s last book, the bestseller and masterpiece “The Black Swan”, will notice that “Antifragile” picks up things where Taleb stopped the last time. The new book is the closing part of a trilogy that started about ten years ago with “Fooled By Randomness”. In “Antifragile” Taleb tries primarily to provide some strategies that enable us to cope with the fragility of systems - on one hand by assessing if something is fragile, or is made fragile by decisions that are made, and on the other side by discussing possibilities to make things (more) antifragile.

Taleb use a triad, or three different states, to illustrate the point. The first state is fragile: things break as a consequence of shocks, disorder or time. One example is an e-book that depends if your reader has enough power. The second state is robust: things are insensible to shocks (until a certain level), like an ordinary book that usually “works”. Finally there’s antifragile: things that do profit from disorder, like an oral delivery which goes from mouth to mouth and often only wins fantasy. For some this may seem strange; after all in common understanding it’s robust that is used as the opposite of fragile, but Taleb aims at another kind of opposite: not the difference between braking and not breaking, but between being harmed by and benefiting from something.

It’s likely that the reader has to get used to Taleb’s use of language and his jargon. He had a couple of specific “own” words (for example ‘fragalista’ which he uses as a label for people who advance fragility - often named, like the president of the Federal Reserve) or terms which he uses to characterize a certain phenomenon (“soccer mom”). This also applies to his style of writing. Taleb likes to stroll, and it shows in his books. This is no scientific academic report or paper (luckily it isn’t!) but a continuous discussion and reflection where the author switches from one subject to another. Sometimes he returns to a subject, sometimes he doesn’t. The contents may vary from seriously technical or mathematical stuff to fantastic or just every day reflections.

The language is flowery and at times outrageous. Taleb is erudite with a preference for the Classics and we’ll know this! All of this is coupled to an enormous waywardness and a certain arrogance (he doesn’t shy back of kicking seriously against the established order within among others economy en science). This may be a certain threshold for some readers. With that in mind it’s a relief that one doesn’t need to read everything. Some parts of the book can be skipped without any problem and without missing part of the message. In fact, on various occasion the author even indicates that a part can be skipped.

One may question how relevant this book is for safety professionals since there is only a limited discussion of ‘real’ safety subjects in the book (Fukushima as one example of fragility is a rare exception). My opnion: definitely relevant. Taleb’s books are about uncertainty and risk, about the thinking about risk and about decision making (with all kinds of consequences). This alone makes the book (and definitely its predecessor) almost mandatory reading.

Do note that this is by no means a ‘Do Book’ that will lead you to an antifragile state (presuming that this is possible and desirable) within 7 Steps. Reading the book can, however, help to create awareness and start a process. To this end it is necessary that each reader picks out relevant elements for himself and translates those to his own every day practice (domain blindness is one returning theme, by the way). Examples are fragility enhancing things like naive interventionism (the urge to implement measures that are likely to be unnecessary which may cause unwanted side-effects that in fact cause a worse situation) and agency problems (decisions taken or advocated by people who will profit in some way from that decision).

On the positive side Taleb discusses a number of tools that may help to enhance robustness or even gain antifragility. To name but a few: the principle of redundancy (preferably applied aggressively because in a time of scarcity one can gain a lot from your own abundance) even though it’s despised by economists and bean counters, optionality (making use of opportunities when they present themselves), flexibility, using heuristics (practical mental rules of thumb that make the everyday life easier) and allowing some hormensis in our lives and organizations (some disorder and stress is necessary to make things stronger, like not always washing your hands before diner can enforce your immune system and is thus healthy...).

One other thought that struck me while reading the book is that Taleb’s fragile/antifragile thinking unwillingly manages to combine two safety theories that are often regarded as opposites within the same framework. I’m obviously talking about Perrow’s Normal Accident Theory (fragile, Black Swans) and the antifragile concepts of High Reliability Organisations (Weick & co) and Resilience (Hollnagel, Woods etc.). For safety professionals it may be confusing that Taleb on several occasions says that antifragile and resilience (to him synonymous to robust) aren’t the same thing, while elements that “we” (safety professionals) range within the resilience framework are seen by Taleb as antifragile elements. A matter of definition, I think, and don’t let that stand in the way of gathering some useful lessons from this book.